One of those Sad Acoustic Songs

Sad acoustic songs are not what I specialize in as a songwriter, but I wrote the song
"Picking Daisies" about the conflict between love and moral codes about the subject
of love, and I guess you'd have to categorize it as a sad song.

Many people, even in modern times, still stop themselves from expressing or
experiencing love because of some code that they have adopted from who knows what
source.   So that's where the song came from - an awareness of something that I
thought should be communicated - maybe you can relate to it - maybe not,
but I hope you can.

Nice daisies!
The song "Picking Daisies" is about the experience that many of us have had of
falling in love with someone, not telling that someone and then sitting in a field
somewhere picking the petals off daisies saying to oneself, "She loves me.  She
loves me not."

I originally recorded this song some years ago on a two track tape deck with a guitar
cord directly plugged into the tape deck and a separate mic used for the vocal.  The
guitar track was uniquely good, so I saved it and later had it transferred to digital
format as part of creating my first CD Untrapped.

Because there was so much tape hiss in the tape recording (which I couldn't eliminate
at the time), my pro mixer had one helluva time mixing and mastering the song so the
tape hiss wasn't so predominant in the song.  He finally managed to make it like a
a vintage recording from the 70's and it worked out OK, and definitely fits the category
of one of those sad acoustic songs. 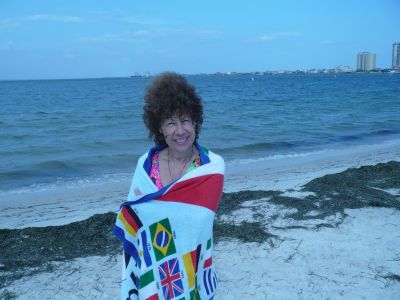 Yes, "Picking Daisies" starts with the line, "Lady girl with lovely curls, you don't knowyou got me crazy."  The lady in the picture above has lovely curls as you should easily be able to see, but she's not the one the song is written about.

In fact, she's my wife, and I have another song I wrote just about her but it's not a
sad acoustic song.  It's actually a joyful love song called "Five Feet of Nitro," but more
about that some other time.
Fan Comments:    "Picking Daisies is beautiful, absolutely beautiful.
I love it!  Very soft and loving."   CG

I also have a video of a performance of "Picking Daisies" that I did in Los Angeles a
couple of years ago, and if you're interested just click on the button below to see it
on youtube.
Video >
Hope you enjoy the song.

And if you're still interested, check out how to get much more at
my home page.

I'd really like to be in communication with you more.