One of the Best Unknown Songs

It may seem a bit obnoxious of me to state that one of my songs is one of the
best unknown songs, but I'm just going by what the fans have told me - and that's
just a fact.

This song is definitely a blues song, and I haven't written too many of them, because
mostly what I write would be classified as folk or folk rock, but sometimes the blues
mood just hits me and something like "Ain't No Hero Blues" is what comes out.

Yea, that's me back in the day.
As perhaps a point of interest, I originally recorded "Ain't No Hero Blues" with an
Ovation guitar (specifically an Ovation Slimline, Honey Burst Flamed Maple, 6 String
Acoustic/Electric) that I rented for a recording session of some other songs back in
the day.  I was just messing around playing the guitar in my apartment, because it
had a really nice feel to it and was easy to play.  So I plugged the guitar straight into
a tape deck at the time, and put a mic on my vocal.

And that was it, until years later when I decided to put the song on my first CD titled
Untrapped, that I pulled out the tape and remarked that it was a pretty good take for
a home recording.  After that, it was a matter of getting the tape track transferred to
digital format, sprucing it up a bit and doing the vocal newly and adding a little
overdrive guitar at a point in the song and we arrived at the finished product that fits the
category of one of the best unknown songs. 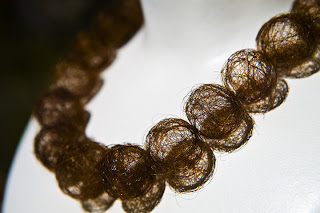 Memories all balled up in chains.
Hell, what can I say about the photo above - it's art - sort of symbolic balderdash,
I guess, but I wanted to see if I could come up with a picture that somewhat
represented the line from the song - "Bring me all your memories, all balled up in
chains."

So unknown songs that are good are probably rare today, but maybe in the not too
distant future, some of those songs may no longer be unknown.

Fan Comments:   "Your music is very different and I like your singing style.
It's very informal and candid and to the heart. I love
"Ain't No Hero Blues." - OJ

"The recording quality is excellent and your guitar comes
through very well. I can hear influences such as the
Waylon sound on "Ain't No Hero Blues". - DN
If you're interested, click on the button below to see the video of the song shot in
Venice, CA a couple of years ago at The Talking Stick Coffee Lounge.
Video > 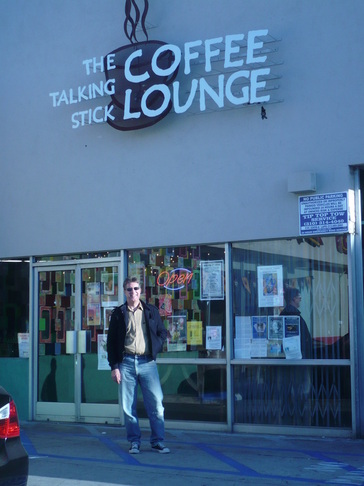 Me in front of The Talking Stick
Well after all that, I do hope you enjoy the song.

And if you're still interested, check out how to get much more at
my home page.

I'd really like to be in communication with you more.